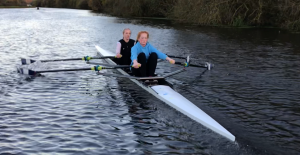 Very cold but clear conditions awaited The Gorse Boat Club when they arrived in York at 7:30 on Sunday morning for the York Small Boats Head. This annual head race, a 3.5km time trial against the clock, is raced upstream and finishes in the town centre. It is so named because the boat classes competing are no larger than a four-person crew. By 8am, Gorse students had thawed out their fingers enough to be able to rig their boats ready for racing and start their pre-race preparations.

Clubs from across the north of England come to compete and this will probably be the last race when Gorse athletes represent our partners, Leeds Rowing Club. So far, Gorse students have raced under the banner of Leeds RC, but now, with The Gorse Boat Club about to become affiliated to British Rowing, TGBC will start to make its presence known. This is just as well as some Gorse athletes made good progress on Sunday with two wins and some other encouraging performances.

Konrad Molenda from Elliott Hudson College was racing in his single for the first time. This was a steep learning curve for Konrad and one which worked. With a better understanding of the course, he jumped in a double with a Leeds RC junior later in the day for his second race and beat a solid field of senior and university crews to win by 10 seconds.

Michelle Igiehon and Oliwia Rzadkowska went in the girls J15 double (WJ152x). This was their first competitive race and they coped well with the nerves to take their learnings on Sunday into their next event.

Alex Fullerton and Tom Hendrey competed in the J142x and finished a creditable second to a classy York City crew. In doing so they beat off the local private school competition and a great season ahead promises for these committed boys.

York City have an outstanding junior squad and are always formidable opposition on home water. However, this didn’t make any difference to Holly Anderson and Emma Fullerton who beat their York City WJ142x opposition to win their category by a whopping 40 seconds on a course they had never rowed before. This is a crew with exciting prospects and, if they continue to improve at this rate, they could do well in the bigger regattas in the summer.

As ever, this dedicated crop of Gorse students conduct themselves with maturity and continue to be a credit to their schools and the Gorse Academies Trust. Now they are starting to taste success too.