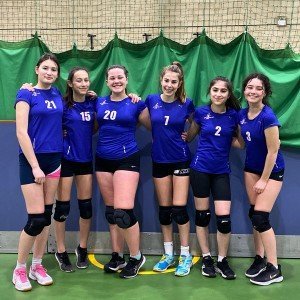 The GORSE Trust Academies and Leeds RGA Volleyball Club made history on Sunday as the U15s girls team secured their place into the final eight of The National Volleyball Championships!

The squad has dominated the northern regions finishing 3-0 in both the first and second rounds of the competition. This age group has been improving each year, but now that Volleyball is part of the ‘Big 3,’ the support provided has made the difference in the team’s progression and success. They are now the first Leeds Junior team to reach this level.

The drive, passion and perseverance of this team is evident, especially when under pressure. In the final set of round two, the team was down a set, but fought with all their might, went into extra points, and pulled out the win! Not only is this group determined, but they play as a true team. The girls pick one another up when teammate is down, they put new players at ease, and support each other on and off the court. This group has provided a sense of belonging and unity for our student athletes.

We are hopeful for the future, and can expect big things for the GORSE Volleyball Club.